An industry wide push for bigger numbers has resulted in unrealistic expectations, and exaggerated figures from some tuners – here’s a good way of spotting the more optimistic dyno’s & tuners…

A dyno can only accurately measure torque at the wheels, horsepower is a calculation of torque and RPM, and the flywheel horsepower figure is a calculation based on drivetrain losses. Whilst this all sounds very very boring, it’s pretty important to understand this when choosing a tuner based on their previous results as not all dynos are equal, and not all flywheel calculations are the same. Here’s how we go about calculating horsepower.

What are drivetrain losses?

Your engine looses power through the drivetrain – I mean think about it for a second, thats a huge amount of effort to move two differentials, a prop shaft, four driveshafts, four wheels, all the internals of the gearbox, the clutch assembly AND the flywheel! That’s an awful lot of metal that the engine has to move before it even gets to putting the power onto the tarmac! Drivetrain losses are usually measured in a percentage format.

How do we work out BHP from WHP?

Two parts to this – first we take the wheel horsepower figure (WHP) that the car has made on the dyno.  BHP-WHP= Horsepower Loss. We then divide HP loss by BHP and multiply by 100 to get our drivetrain loss percentage.

So what do we do with all of that then?

First up we need to know what each type of drivetrain consists of, and roughly where we need to be;

With these numbers in mind we can usually work out if a car is making correct power stock, and use this drivetrain percentage loss to work out the tuned gains.

Why is all of this relevant to me?

We often see claims that other tuners can get more power from a vehicle. A little research has shown us that some UK tuners are using as much as a 25% drivetrain loss on FWD vehicles!

How would this affect my dyno results?

Why would people do this?

Power figures sell tuning. Every owner has got a power figure in mind, and you’ll always go to the guy who’s making the best figures right? If I tell you we can get 250BHP out of your car, and the next guy says he can get you 280BHP for the same price, then you’d go for it.

Isn’t this just excuses from you guys for not being able to get the same figures as everyone else?

Nope. We run a Mustang dyno, which is very very strict in the first place. We then manually calculate drivetrain losses to ensure accuracy. As a result we KNOW the JFA tuned cars will make the right power on any dyno anywhere in the country.

We’ve seen a lot of people show up for dyno days, then claim the dyno is broken when their car produces 100BHP less than they saw on their tuners dyno – you then strap an identical car down from a reputable tuner and have it make the claimed numbers. The dyno can log throttle position on most cars, so there’s cold hard proof the owner has been lied to about what his car is capable of.

We also have a weather station in the front of the dyno cell monitoring humidity, and air temperature – allowing us to offer a weather corrected figure, so the figure we give you is the power it’ll make on average. Not on a cold day, not on a hot day, just a straight realistic answer as to what your car will make.

If we send a car out with 400BHP, and the owner takes it to Santa Pod and gets beaten repeatedly by 300BHP cars it really doesn’t reflect well on us…and it’s the same if our customers take their car to a dyno day at another centre and make significantly less power than our printout shows.

It’s just best to be honest – if the car doesn’t make the power you wanted, we’ll offer advice on how to get there!

What to look for?

The WHP figures are whats important – and solid proof of those, flywheel numbers are at best an educated guess. Both the C63’s shown on the dyno graph below had been confirmed at making the same flywheel power by two different tuners…the lower performing car is over 100WHP down on power, and had had the rev limiter raised to 7,100rpm to give the impression that the car was making more power. You really do get what you pay for in the tuning game; 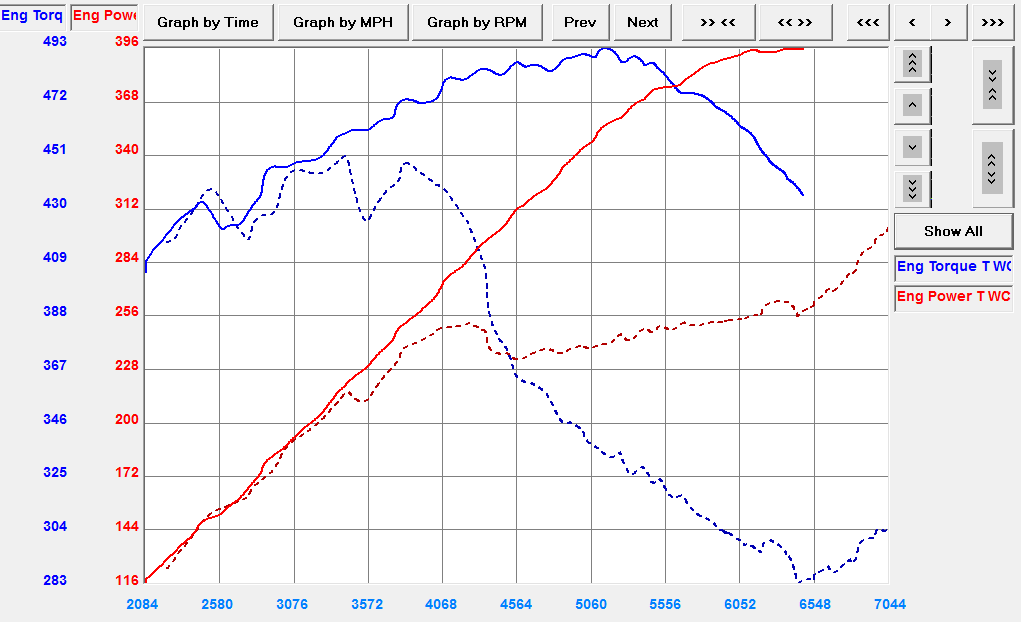 If in doubt, drop us an email – we’re always happy to go through figures with you & can advise what we usually get from your particular make/model of car.

Get a free quote

To see the wide range of ECU remapping services and performance parts we have available for your car, simply enter your registration number below:

Sign up today to receive exclusive offers for parts and ECU tuning!